Might and Magic: Elemental Guardians is an RPG where you travel through the world of Might and Magic and collect over 400 heroes on your journey. Build a team of 5 warriors and fight against the legendary creatures of the world. Although the game is made from the original version on PC, the mobile version’s graphic style goes in a very cute chibi direction.

Might and Magic: Elemental Guardians does not try to replicate the style of its predecessor, but instead brings the flavor of Summoners War: Sky Arena. That’s why there gamers can summon the wonders of the ancient world, train and bring them into the most frantic battles.

The game has a pretty eye-catching and cute 3D color image, which looks like a combination of League of Legends and Clash Royale. And the gameplay of this mobile game is also confirmed to be a combination of the two games above. You will create a hero, level it up, increase its power and unlock more allies to fight and support you on your adventure.

Appearing since the 1960s, most of us are no stranger to Minesweeper, one of the games that come with the Windows operating system. Not exactly a favorite game for everyone, Minesweeper still holds an important place in the hearts of many gamers and computer users.

Over the decades, Minesweeper has been loved and is often the first choice of gamers or office workers in their spare time. Of course, the game also has many reworked versions, more attractive, but still retain the inherent challenging gameplay. The most prominent of them can be mentioned, Minesweeper Genius from the developer Mgaia Studio.

Minesweeper Genius is a puzzle game that is not Minesweeper, the game that everyone got bundled in with Windows on their PC over the last few decades. Rather, it is a game that takes the basic concept of Minesweeper and turns it into a character-based puzzle game.

So, rather than clicking on a grid to uncover which areas are safe and which are mines. Players control a man literally sweeping his way through a minefield. Much like a Pictocross game, there are numbers on the top and side denoting how many mines are in that column or row, and players must use that to deduce where the mines are to find a safe path for the sweeper to get to the exit.

To aid them in this goal, players can, much like Minesweeper, mark places with flags to indicate that those spaces are unsafe. In addition, the game introduces additional elements, such as panels that shift around the playfield or zip your sweeper over a space.

In practice, the game plays… fine. There’s nothing especially exciting or compelling about it, it doesn’t have that addictive quality you really look for in a puzzle game, but as a time-waster, it’s perfectly decent, if unspectacular. 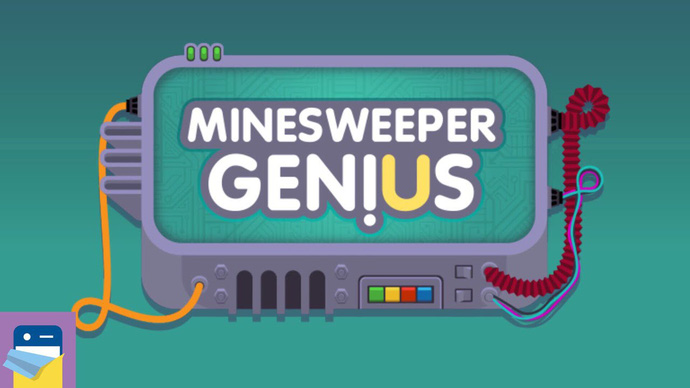 The same can be said for the presentation – The interface here is clean and colorful, nothing especially interesting or out of the ordinary, but it works well enough for what the game is.

Honestly, the biggest issue I have with this game’s gameplay, it’s that there’s no way to simply just play a game of Minesweeper with the thing, since I remembered having a lot more fun with Minesweeper than I’m having with Minesweeper Genius. Oh, also, it’s frustrating that you can’t mark a space as safe doing so. That would make solving the game’s puzzles more straightforward.

In the end, Minesweeper Genius is an okay Puzzle game. It has the unfortunate problem of being named after a much better puzzle game. It’s perfectly fine, but it’s simply not as fun as the game it gets its name from.

In a world where every household object has come to life. Things aren’t going well for any that happen to be edible. The evil Blender has kidnapped your berry chums. And only you can save them. Unfortunately – as you might have gathered from the name of this game. In Silly Walks, you’re hampered by a very silly walk.

We’re not quite in John Cleese territory. But star of the show ‘Pineapple’ (in fact, some kind of cocktail) walks a bit like a bow-legged cowboy. It turns out, this isn’t the smartest way to get from your starting point to your soon-to-be-juiced chums; especially when in-between you find stabby knives, pulverising hammers, and all manner of psychotic household appliances.

In fact, it’s even sillier than that, because there aren’t even any remotely granular controls. If you expected to toddle along by way of a virtual joy-pad. Nope, the fruity hero is controlled entirely by a single finger.

Tap the screen and Pineapple plants its left foot on the ground and proceeds to rotate anti-clockwise. Tap again and the right foot goes down, and the tasty protagonist rotates clockwise instead.

With careful timing and a bit of planning, you can get up a reasonable dodder. Staggering along like a drunk after closing time, and very occasionally speedily ‘dashing’ across short distances by swiping the screen.

In early levels, it pays to take your time. You pick your way around a kitchen where suspiciously elaborate pathways have been created to get you between tables. Sugar cubes are eaten – which subsequently act as currency to unlock new levels. And you partake in wanton destruction wherever possible, booting glasses and bottles to the floor.