10 most downloaded mobile games – The year 2021 has passed half a year, with the Covid-19 pandemic covering almost the entire year forcing everyone around the world to quarantine. However, the gaming industry has had the opportunity to grow faster than ever, with mobile games being seen as leading the way. In this article, we will list some of the most downloaded mobile games in May 2021 as selected by APK-LIVE. For more information, checkout our website at APK-LIVE.

Since mid-2019, miHoYo (a famous game maker in China) has released the first images of the Genshin Impact game. With its impressive graphics and gameplay, the game has conquered many players around the world.

After 2 years of development. At the beginning of this May, when the game was updated with the most unique features ever, I was amazed at what a free game brought (although you can top up to have an advantage ). The hunting, flying and combat system is so invested that many people think this is the 2nd version of Legend of Zelda.

This is a free game

Free! It is important to say it 3 times. Just kidding, but really this is a completely free RPG game for you to experience. No money to download the game, no money to buy special items, and no money to own the strongest characters in the game. All of you can ‘plow’, however, the game still supports a recharge system to make it easier for you to ‘plow’. However, it contains gacha (rewards) element, so no matter how much you recharge, it won’t get any stronger. 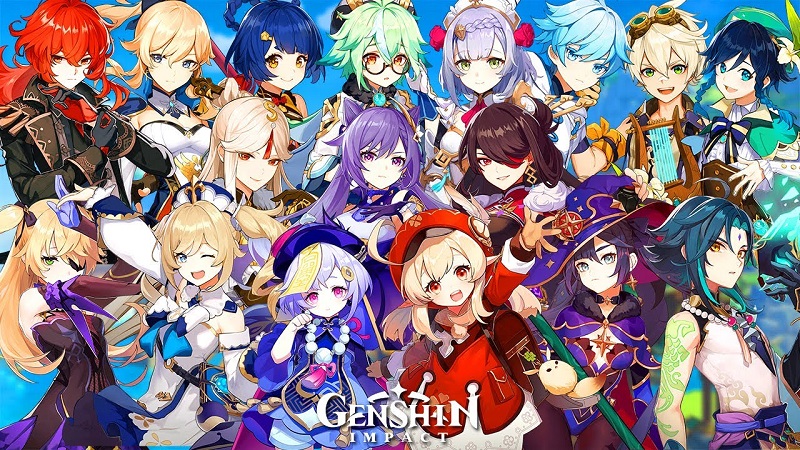 miHoYo has pampered players when bringing Genshin Impact to 4 platforms: mobile, PC, PS3 and PS4. You can use 1 account to play on all 4 of these platforms, which means that player data will be synchronized. It’s convenient when having fun, fighting on the computer, a little lazy, then lying on the smartphone.

The difficulty of many phone games when bringing to PC or other platforms is to emulate. This requires a pretty powerful CPU as well as a lot of RAM. However, the game company has really brought this game to the PC and is a completely PC version. My laptop is quite weak, just Intel Core i5 and discrete graphics card 940MX but still good at this game. If you have questions about the minimum configuration, you can refer to

“Genshin Impact is a combination of anime graphic art and the aesthetics of many different cultures. Players will have a whole new experience when traveling through the different lands of Teyvat.” miHoYo answered when asked about the environment in the game.

Currently, Genshin Impact has only introduced 2/7 lands, but it took me more than 2 weeks and only discovered about 40% of this map.

Besides, interacting with the environment in the game is also a big plus for miHoYo’s young child. You will be amazed to witness the weather system as well as its elemental interactions. Sunshine, rain, sunset or sunrise, … all shown in detail and beautifully. As for elemental interactions, when you use fire, the surrounding grass will burn, and when you use water or ice on fire it will evaporate, or you can freeze water with your element or fish with electrical element

Oh, forgetting about the plot, I’ve been through about 50% of the current plot and found that this is a game with depth. Each character is quite elaborated by the producer, sooner or later the game will have comics and full of drama like the way they did with Honkai Impact 3. 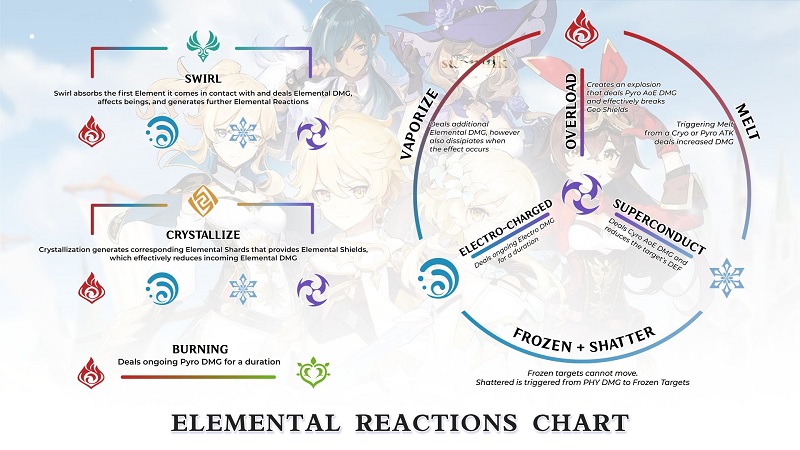 As you explore Teyvat, you’ll meet a colorful and individual cast of characters who will help you on your journey. In addition, there are 23 characters you can control (there are characters for free, there are characters that have to be rewarded). The skills and ways of fighting are also different. They have the power to manipulate their own elements. There are 7 elements including: Hydrogen, Pyro, Electro, Anemo, Geo, Dendro and Cryo.

The game’s combat system is also quite easy to get used to. But you need to spend a lot of time mastering it. Each character will have 3 main buttons: normal attack, secondary move and ultimate, which is quite small compared to current RPG games. However, if you have experienced Honkai Impact 3 then you will see with just these buttons how beautiful combo we have.

Switching characters during combat brings about an elemental response, which makes gameplay and combat more diverse and allows you to deal massive amounts of damage to your target. As mentioned above, you also have the ability to interact with the environment thanks to these elements.

In fact, Supergiant Games’ Bastion was introduced on many platforms around July 2011. With quite simple but attractive RPG gameplay, an attractive storyline and eye-catching graphics. It created a pretty hot game at that time. A year later, Warner Bros. has continued to introduce an iPad version of Bastion, satisfying gamers who love to travel.

Anyway, I find this to be absolutely true as the hero who saves the world. It is always a topic that never gets old with the producers. Bastion tells the story of the boy Kid, one of the few survivors on the land of Caelondia. Which was destroyed and completely destroyed by a demonic force.

Not only Caelondia but most other lands are also in the same situation. Only Bastion is known as the only city that still exists. Kid begins his journey on the road to Bastion city, searching for survivors and saving the world from the demons.

Compared to the PC version, the mobile version is somewhat inferior to its elder brother from both graphics to gameplay. However, this is completely acceptable and does not mean that we underestimate the game. Bastion is quite appreciated, with cartoon-style designs and bright colors. The sound of the game also makes players unable to ignore with the melodious, gentle background music.